This is a standalone board that takes eight 3V GPIO pins (such as from a MCP23017 or MCP23008 HAT board or just from eight of a Raspberry Pi’s GPIO pins and buffers them to drive up to eight LEDs from a 5V supply. It is specificly designed for common cathode signals. It has a ten position screw terminal at one end, for GND, GPIO 0 through 7, and +3V (it does not actually use the +3V connection, but includes it to match the terminals on a MCP23017 or MCP23008 HAT board and thus can support the use of ten conductor cable or pin header connectors, etc.). At the other end it is two sets of +5V and ground terminals (to allow for daisy chaining the +5V supply bus), and nine position screw terminal for LEDs 0 though 7 and the common cathode (K), which is ground.

The circuit is just eight driver circuits, each featuring a NPN and a PNP transistor, that level shift and buffer the 3V logic to 20 milliamp, 5V LED drive circuits. The circuits include a current limiting series resistor, so there is no need to include external resistors on your LEDs. The circuit assumes 2V LEDs (typical of standard red, green, and yellow LEDs).

The only parts that might be substituted are the screw terminal boards. Feel free to select either pin arrays or spring terminals for the terminals. 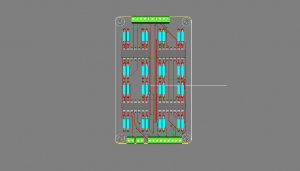 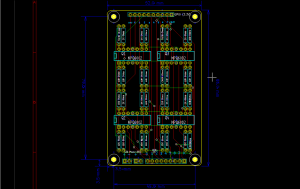 Board assembly is straight forward. You need to be careful orienting the quad transistors.